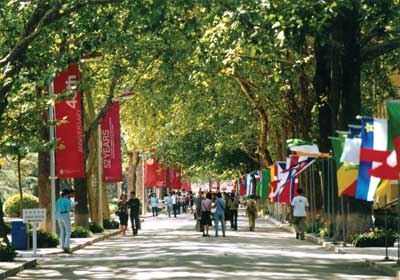 Beijing Language and Culture University (BLCU) is a multidisciplinary university which focuses on languages studies.BLCU isa Project 211 university under the direct of Ministry of Education.As the foreign part,its main purpose is to teach Chineselanguage and culture to international students. For this reason BLCU becomes the most popular university to study Chinese in Beijing. BLCU likes to define itself as the “Little United Nations” as it attracts students from all over the world.Every year,hundreds of international students choose to go to BLCU for Chinese study.BLCU owns a good reputation among both international students and native language learners .BLCU is not far from Wudaokou.

Beijing Foreign Studies University is located next to the Third Ring Road,Haidian District with two tiny campuses.Beijing Foreign Studies University (BFSU) is considered the most prestigious university to study foreign languages in China.As many other universities,BFSU also set a Mandarin language department with a goal is to train the Chinese students that are goingto teach Mandarin all over the world.Even though it isn't as popular as BLCU, BFSU also attracts a large number of international students who aim at mastering the Chinese language.

The strongest point of this university is represented by its students besides its high quality teaching quality. BFSU is the perfect place to make friends with a strong background in Chinese language teaching who are interested in your language and culture at the same time. The reason behind this is that many of BFSU's Chinese students study both Mandarin and other two foreign languages.

Peking University is one of the two top universities in China, and absolutely the best university for social sciences studyprograms. Its beautiful campus is located near Wudaokou.It’s the home of some of the brightest Chinese students.Although PKU isn't especially known for its Chinese language programs, it's one of the most prestigious universities in China and features joint study programs with several universities around the world , including learning Chinese programs.Students from all over the world come to PKU to study. Chinese.

Tsinghua University is located close to PKU, its especially strong in scientific study programs and it's another best Chinese university.Historically Tsinghua has been the university where the States recruit the most brilliant Chinese students for their Master and Ph.D programs. Furthermore, it attracts enormous investments from the Chinese government,foreign partners and private Chinese companies.It's probably the place where are studying most of the future leaders of China.

Tsinghua gathers many foreign master students every year, especially on technology and hard science related majors.Even if the courses are English medium, the university established high quality Chinese language courses for exchange students.Tsinghua University is another option which deserves consideration.