Starting with China's incredible Harbin Ice and Snow Festival, another big year of celebrations in China will be kicked off in 2015. Some of the events provide insight into China's cultural diversity. Others simply showcase the nation's love of a good party. Here, we introduce some attractive festivals and events that may attract you to attend. 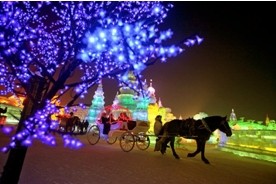 In 2015, the incredible Harbin Internatioanl Ice and Snow Festival will host its 30th event. This spectacular festival is a celebration of art and light -- and, of course, ice and snow -- featuring incredible, life-size castles, structures and colorful lanterns all constructed from meter-thick blocks of ice pulled from the Harbin's Songhua River and lit with LED lights.

During the festival, the entire Siberian-esque city, located in frigid northeast China, becomes an ice and snow playground. Sun Island hosts snow sculpture exhibitions, Ice and Snow World is where you'll find the frozen buildings and the ice lantern show is in Zhaolin Garden. 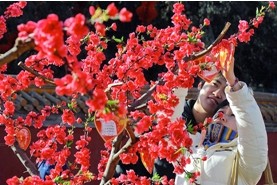 A dazzling way to welcome the spring, this flower festival in Guilin, Guangxi province, marks the yearly resurgence of the area’s abundant peach blossoms.

Chengdu native Anne Wang, 28, loves the natural vibrant colors on display. To the Chinese, peach blossoms symbolize life, growth and prosperity. “Some are dark red, while others are really light pink,” says Wang. “Together, they look like a painting.”

When/where: Dates in 2015 are yet to be announced but the month-long festival usually starts early March; Gongcheng, Guilin, Guangxi province 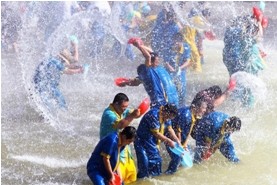 Much like Thailand's Songkran, China's ethnic Dai minority celebrates its New Year with a water fight that stems from an ancient Indian Brahman practice. Xishuangbanna, in China's Yunnan province, has a particularly large Dai population and is the best place to observe and take part in the bathing of the Buddha.

Signifying good luck and health, the traditional splashing of water is guaranteed to turn into a massive battle spiced up by water guns made of bamboo. 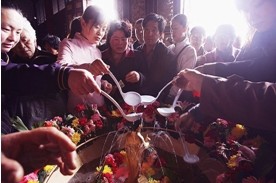 For a more traditional Buddhist ceremony, the Shaolin Temple’s hometown of Dengfeng hosts an annual Buddha Bathing Festival in celebration of the original Buddha Sakyamuni’s birthday.

A figure of the Buddha is placed in a bowl surrounded by an altar of flowers that represents his birthplace, the Garden of Lumbini. It's then bathed in holy water, which monks themselves later use. Meant to drive away evil and cleanse the spirit, the purification ceremony is followed by traditional dance, meditation and feasting.

When/where: The fourth day of the fourth month of the lunar calendar (May 17, 2013); Dengfeng, Henan province 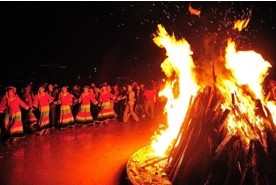 One of the most popular festivals in southwest China, the Torch Festival is celebrated by the country's ethnic Yi minority.

Liangshan holds one of the largest gatherings, which features traditional music and three days of dancing, bull fighting, fireworks, a market fair and, of course, lots of bonfires. The festival is held to ensure a good harvest during the coming of the new year, held in July according to the Yi's traditional calendar.

When/where: Dates vary depending on area. Most Torch Festivals are held from the 24th to the 26th day of the sixth month of the lunar calendar; Liangshan, home to one of China's largest Yi communities, is in southwest Sichuan. 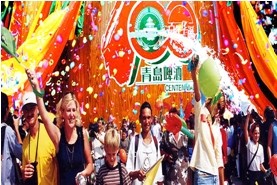 China might not be the first place one associates with beer, but the Qingdao International Beer Festival is working to change that.

According to 27-year-old Shanghai native Vivi Zhang, it's a summer highlight. “I always look forward to going to the Qingdao Beer Festival,” she says, “because it’s a giant outdoor party.” 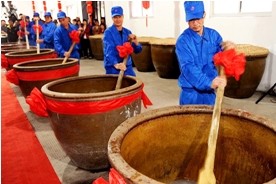 The Shaoxing Rice Wine Festival kicked off in 1990 to showcase the historic water town of Shaoxing’s most famous export.

Visitors sample the spirits, watch live performances and tour the local brewery to see how water from nearby Jianhu Lake (Jianhu-Mirror) is processed into the potent yellow alcohol Chinese love.

The city of 5 million currently produces more than 110,000 tons of rice wine per year.

When/where: Dates in 2015 are yet to be announced. The festival usually starts around mid-October and lasts for a month; Shaoxing, in northeastern Zhejiang province 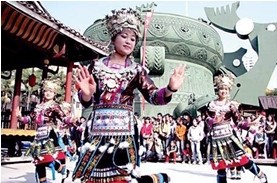 China's Miao ethnic minority is still relatively untouched by tourism, which provides a rare opportunity for visitors to observe and participate in the community's annual New Year’s celebration.

When/where: End of year on the Miao Calendar (around mid-November); Leishan, Guizho 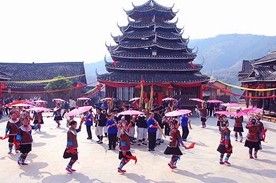 Ringing in the traditional New Year with the Dong people in Qiandongnan means spending time with an ethnic group of some 2 million people in China.

This minority has preserved their traditional culture and customs, from intricate architecture and famous drum towers to traditional food, which includes pickled carp and glutinous rice cakes.

The culmination of the festival is the water buffalo fight, which uses specially trained animals.

When/where: The annual event is held from the first to the 11th day of the 11th month of the lunar calendar; The biggest Dong New Year's Festival takes place in Qiandongnan County, Guizhou province.